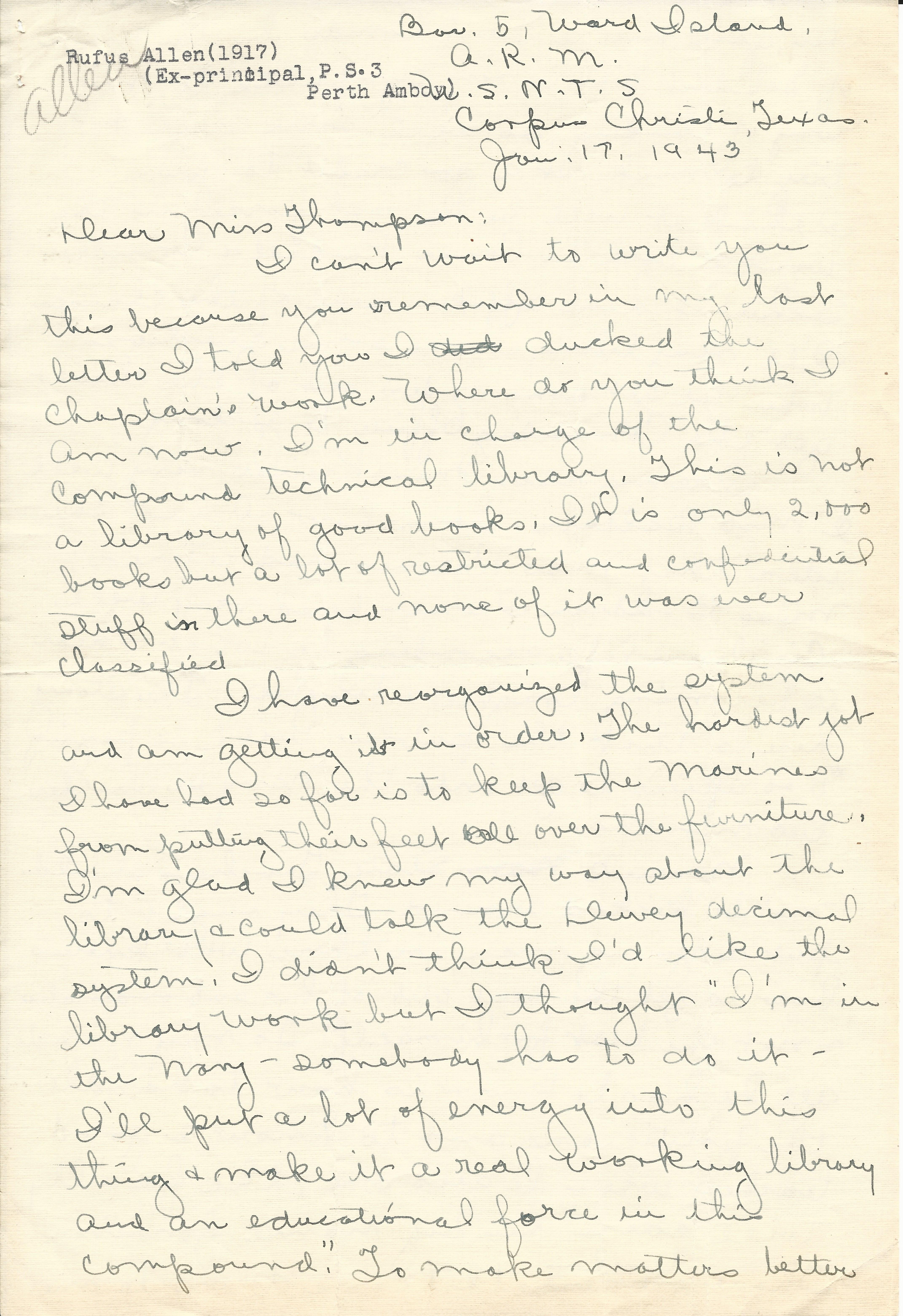 I cant wait to write you this because you remember in my last letter I told you I ducked the chaplains work. Im in charge of the compound technical library. This is not a library of good books. It is only 2,000 books but a lot of restricted and confidential stuff in there and none of it was ever classified.

I have reorganized the system and am getting it in order. The hardest job I had so far is to keep the marines from putting their feet all over the furniture. Im glad I knew my way about the library & could talk the Dewey decimal system. I didnt think Id like the library work but I thought Im in the Navy  somebody has to do it  Ill put a lot of energy into this thing & make it a real working library and an educational force in this compound. To make matters better they gave me a Lieut Comdr by the name of Schubert who is very sympathetic to my way of thinking, so well aim high & try to make it a credit to you. I think it will be a real force in the work & both Lt Comdr Randall & Comdr Schubert have spoken well of the changes. Ill very likely have some questions when we get some order out of the chaos & get the Commanding Officer to go along.

I remember Miss Kreiner very well. Miss Baldwin. Somehow I had the idea that Miss Kreinerhad retired; Miss Baldwin I remember very well. Civilian life according to what I hear is becoming tougher & tougher. The story here is that the public will be paying $1500 apiece to get into the Navy in another two months.

Newark State Teachers should not be kicked around. They ought to put a young man in there who knows how to get the best out of his subordinates & not the best for himself. To my mind all he has to know is how to handle the politicians and to know a good teacher where he sees one; the faculty will earn his big name for him. Those teachers that came down to me were 100%. They knew how to handle their classes & they knew their stuff.

I got quite a laugh out of one of our instructors in the compound named Curral who ran a notoriously dull class. Some lad put a sign on his desk saying George Washington Slept here. Another lad comes along & writes under it Whats good enough for him is good enough for me.

Reading the school paper thru I think the record of the graduates is very impressive. It does seem strange to see us back in war again after the promises of 17-18. I never did go overboard for the peace plans. My philosophy regarding wars is about that of 17 & 18. That in the present stages of civilization war is one of the certainties of the future. I asked one of these R.A.F. lads if they thought this was the last war. He said Therell always be war!!

The only cure I know is to build a modern army & air force & a navy second to none. We do all the peace talking the other countries prepare for war.

It is good you have good men like Mr. Sloan & Mr. Hatch. This war is sure wreaking havoc on the educational systems of the country.

I had a letter from John P. Milligan. John is a good fellow of lots of ability but eaten up with ambition. I get a kick out of him. When he eats in a restaurant the whole restaurant knows that youre a teacher. Profound ideas at a time a dozen.

I couldnt help laughing at three sailors running up the street it was cold and those wide trousers were flapping in the wind & those tight hips made them look like they were bow legged. The first thing I know I was running myself 0 then the idea struck me I was funny too & doing the same thing. I guess thats the way the world is. A few more years & well be back laughing at the troubles were experiencing today. I hope the educators never again go overboard for any idea on peace that does not have a darn big Army & Navy basis. Too many good lives given for an idea that wont work. Thanks a million for your kind letter.

Write when you can & Ill try to write you a good letter nextime.