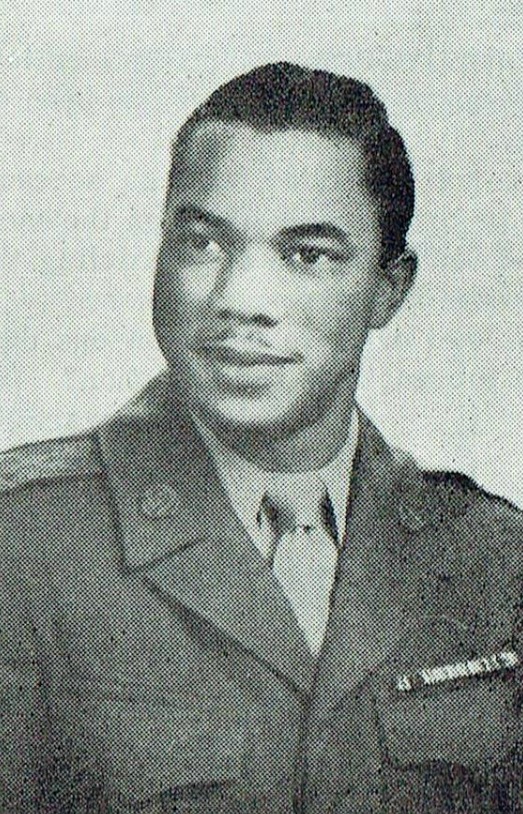 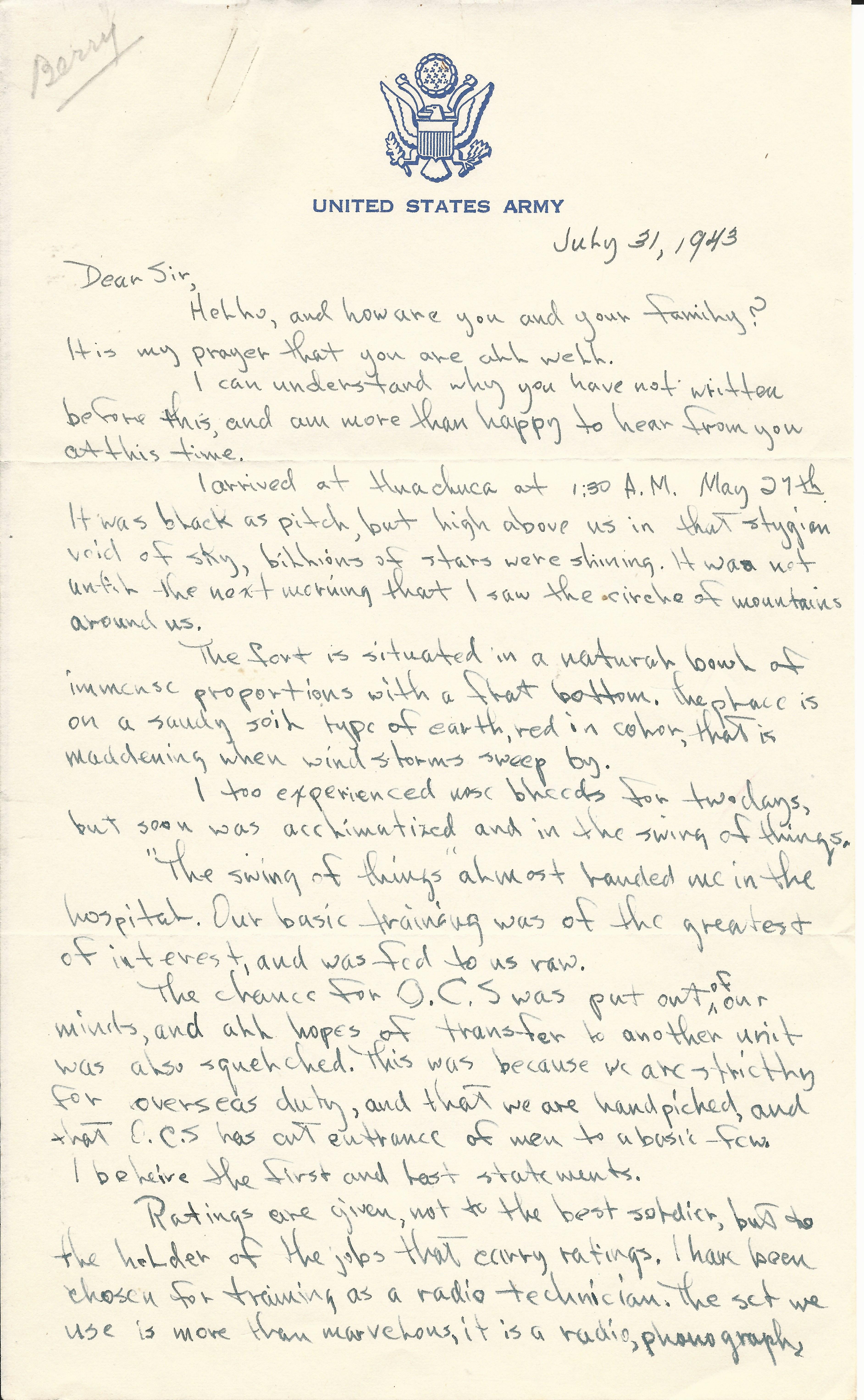 United States Army July 31, 1943 Dear Sir, Hello, and how are you and your family? It is my prayer that you are all well. I can understand why you have not written before this, and am more than happy to hear from you at this time. I arrived at Huachuca at 1:30AM May 27th. It was black as pitch, but high above us in that stygian void of sky, billions of stars were shining. It was not until the next morning that I saw the circle of mountains around us. The fort is situated in a natural bowl of immense proportions with a flat bottom. The place is on a sandy soil type of earth, red in color, that is maddening when wind storms sweep by. I too experienced nose bleeds for two days, but soon was acclimatized and in the swing of things. RThe swing of thingsS almost landed me in the hospital. Our basic training was of the greatest interest, and was fed to us raw. The chance for O.C.S. was put out of our minds, and all hopes of transfer to another unit was also squelched. This was because we are strictly for overseas duty, and that we are handpicked, and that O.C.S. has cut entrance of men to a basic few. I believe the first and last statements. Ratings are given, not to the best soldier, but to the holder of the jobs that carry ratings. I have been chosen for training as a radio technician. The set we use is more than marvelous, it is a radio, phonograph, public address system combined. I had charge of setting up for the commander of the post, and was proud of the job that was done. The basic training period is over and technical training has begun: Wish me luck, because the Commanding Officer of the company changes us around at will. I have already been through gas. This happened two weeks after basic training, and was sprung on us as a surprise. We were having basic war games at night and while we were going down a very steep, rocky hill, the gas charges were set off. I was behind the C.O when it happened, he almost got a dose of it because the bomb exploded 3 yards from him. It was a real thrill. After the gas test we practiced filtration movements through enemy positions. I and 49 other jeeps, (new soldiers) were the enemy. We laid our young tender bodies down on the rocky ground and strained our eyes and ears to detect the advancing men. My squad was most successful. We caught 7 men. On the second bivouac I had my experience with a tarantula. My tent mate ran out and did not tell me what was up. I found out when I glanced out of the corner of my eye and saw the biggest, hariest spider I have hoped to see. I left the tent by itself until I ran out of breath, then I returned with some sticks and rocks as escorts. I also found my tent mate. We did kill that tarantula, and stayed awake all the rest of the day. Then the company dug foxholes; need I explain further? The holes were to be tested with a jeep running over them, but we found that they had been dug too wide and the wheels of the jeep touched occupants of the first hole tested. The fellows are out of the hospital nowI. My greatest downfall, and my only downfall came on the rifle range. I was one of the two men who made five consecutive bulls eyes in slow and rapid fire. We fired slow fire in the morning, and I was heading for expert qualification, but one of the fellows changed the windage and elevation on my rifle, and I had not chance to zero it again so I had to go into rapid fire with my rifle off center. We have to fire ten shots in sixty seconds, using two clips of 30 caliber ammunition. I tried to judge the proper setting but you canUt hold a Springfield like you would a 22 caliber. The gun has a strong recoil, and must be held tightly. I did not reach my qualification and am still hurt about it. That soldier who tinked my gun is on extra duty. I must close now because lights go out in 15 minutes and I must scrub my floor. Give my love to Mrs. Plenty(sp?). I will write her soon, but I want to her to know I have not forgotten. I am grateful to all the people at school for their concern over my welfare. I am not too downhearted at not getting to O.C.S. I feel that I can do a good job as a private, or in any other office they give me. I will not forget your fine attitude and the great help you gave me. DonUt schedule me for Visual Aids in 1944, (I pray to God I will be back by then) but give me everything else. I have a great love for home, green trees, and all the other things there, plus a girl at school. She loves me too, I think it is swell. So you can tell all the people to write me as much as they want to, I wonUt mind it at all. I miss school so much, I dare not think about it too much. I will be last to get back, because there are only three negro special service companies activated, and we will be servicing those troops waiting to get back to the States when the Peace Treaty is finally signed. Thanks fellah for everything, and donUt hesitate to write. Sincerely, Pvt. Del Berry