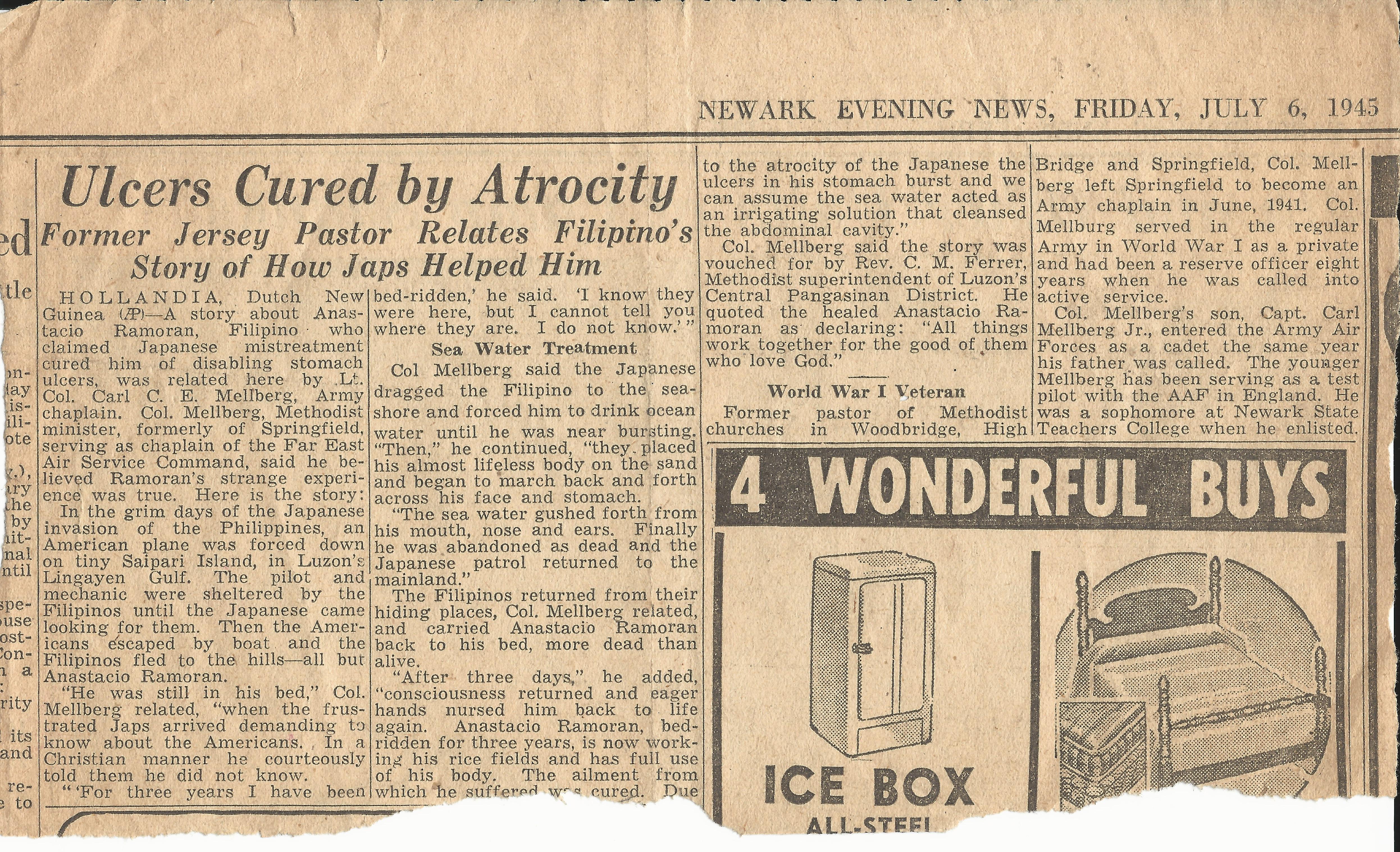 HOLLANDIA, Dutch New Guinea (AP) --- A story about Anastacio Ramoran, Filipino who claimed Japanese mistreatment cured him of disabling stomach ulcers, was related here by Lt. Col. Carl C. E. Mellberg, Army chaplain. Col. Mellberg, Methodist minister, formerly of Springfield, serving as chaplain of the Far East Air Service Command, said he believed Ramoranbs strange experience was true. Here is the story:
In the grim days of the Japanese invasion of the Philippines, an American plane was forced down on tiny Saipari Island, in Luzonbs Lingayen Gulf. The pilot and mechanic were sheltered by the Filipinos until the Japanese came looking for them. Then the Americans escaped by boat and the Filipinos fled to the hills --- all but Anastacio Ramoran.
bHe was still in his bed,b Col. Mellberg related, bwhen the frustrated Japs arrived demanding to know about the Americans. In a Christian manner he courteously told them he did not know.
bbFor three years I have been bed-ridden,b he said. bI know they were here, but I cannot tell you where they are. I do not know.bb
Sea Water Treatment
Col Mellberg said the Japanese dragged the Filipino to the seashore and forced him to drink ocean water until he was near bursting. bThen,b he continued, bthey placed his almost lifeless body on the sand and began to march back and forth across his face and stomach.
bThe sea water gushed forth from his mouth, nose and ears. Finally he was abandoned as dead and the Japanese patrol returned to the mainland.b
The Filipinos returned from their hiding places, Col. Mellberg related, and carried Anastacio Ramoran back to his bed, more dead than alive.
bAfter three days,b he added, bconsciousness returned and eager hands nursed him back to life again. Anastacio Ramoran, bed-ridden for three years, is now working his rice fields and has full use of his body. The ailment from which he suffered was cured. Due to the atrocity of the Japanese the ulcers in his stomach burst and we can assume the sea water acted as an irrigating solution that cleansed the abdominal cavity.b
Col. Mellberg said the story was vouched for by Rev. C. M. Ferrer, Methodist superintendent of Luzonbs Central Pangasinan District. He quoted the healed Anastacio Ramoran as declaring: bAll things work together for the good of them who love God.b
---
World War I Veteran
Former pastor of Methodist churches in Woodbridge, High Bridge and Springfield, COl. Mellberg left Springfield to become an Army chaplain in June, 1941. Col. Mellburg [sic] served in the regular Army in World War I as a private and had been a reserve officer eight years when he was called into active service.
Col. Mellbergbs son, Capt. Carl Mellberg Jr., entered the Army Air Forces as a cadet the same year his father was called. The younger Mellberg has been serving as a test pilot with the AAF in England. He was a sophomore at Newark State Teachers College when he enlisted.